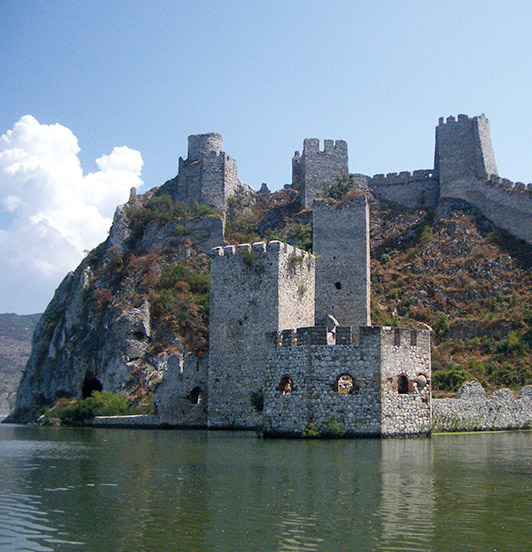 Golubac Fortress was built at the entrance of the Iron Gate gorge, a place where the Danube’s widest stream flows into a pass of the Carpathian Mountains. The Fortress represented an important military border stronghold, built purposely in response to the military and strategic significance of the area. The position of the fortress allowed easy control over all roads and waterways connecting the east and the west, while the steep and inaccessible Ridan cliffs on which the fort was built, as well as the Danube River, provided natural protection. Such position led the border powers – Hungary and Serbia, and later the Ottoman Empire, to battle throughout the 14th and 15thcenturies in order to conquer the Golubac Fortress, thus gaining control and dominance over the state border.

The Name of Dove

In historical sources Golubac Fortress is mentioned for the first time in 1335 as a fortification housing Hungarian military garrison. Although it was erected even before that year, its original builders and the exact date of construction remain unknown. On medieval maps the name appears in various languages:Galambas, Galambocz, Colombazo, Columbaz, Columbarum, Taubersburg, Tawbenstein, Peristerin, Giwerdzinlik…each with the word golub (dove) at the stem.

The explanation for the mystery of the name is found in medieval legends, among which the most famous one tells the tale of an Ottoman town commander who fell in love with a beautiful local girl named Golubana. Having refused to enter his harem, Golubana was cruelly punished – she was chained to a rock to repent. Her defiance to the Ottoman commander led to her death.In her memory the Fortress was named Golubac, while the rock, which protrudes from the Danube to this day, was named “Baba-kaj” (Turkish for “repent”). 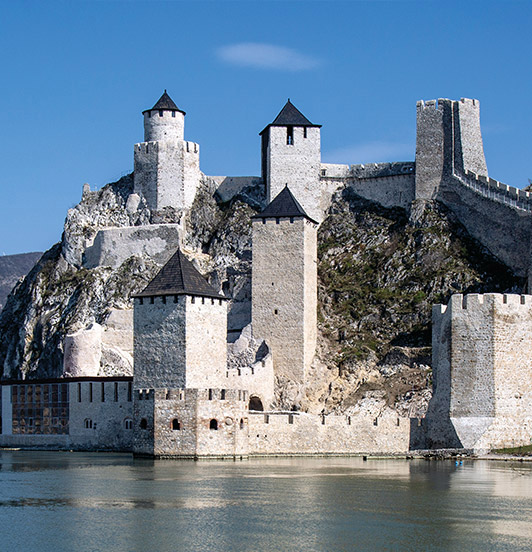 In the 1930s, construction of a regional road that ran through the Fortress caused damage to both gates of the fortification. It wasn’t until the 1970s that the country’s researchers focused their interest on the fortress, prompted by the construction of hydropower plant “Djerdap I”.  Explorations were conducted on several occasions, while conservation and restoration was overseen by the Republic Institute for the Protection of Cultural Monuments.

As a cultural property of exceptional importance, Golubac Fortressalso belongs to the Golubac Nature Reserve, the area surrounding the entrance into the Iron Gate gorge that at the same time represents the entry point into Djerdap National Park. In 2011 the Republic of Serbia declared it the “Golubac Fortress” Tourist Area, for which the infrastructure was provided and the fortress itself reconstructed through the project “Reconstruction of Golubac Fortress”, financed from IPA funds for 2011 and 2016. 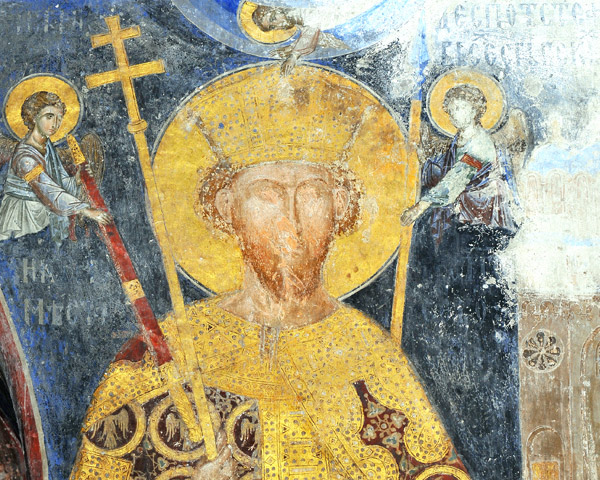 Despot Stefan Lazarevic (1377-1427) was a great statesman, military leader and knight of the Order of the Dragon. Despite dire circumstances, over the course of his reign he managed to stabilize Serbia and strengthen its military power. He was a patron of the arts, a translator and a renaissance poet. His famous legacies include establishment of Resava School transcribing centre, relocation of Serbia’s capital to Belgrade, and the poetic epistle ‘A Homage to Love’. Once he took possession of Golubac Fortress, he had it expanded and added a palace in the littoral zone. 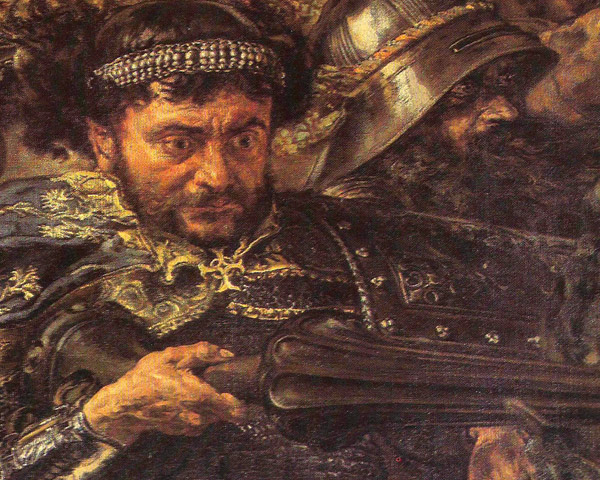 Zawisza Czarny (1379-1428) was a famous Polish knight and diplomat, who joined the Hungarian king Sigismund in his campaign to conquer the Golubac fortress. Within his preparations to win Golubac back, Sigismund of Luxembourg built a military base, the fort of Laszlovar, on the Danube’s left bank. After a hard battle, the king barely escaped alive, while the brave Zawizsa Czarny, not wanting to leave his knights and comrades, launched an attack against the Turkish army. He was captured and, later, cruelly executed; the news of his death echoed all over Central Europe. The Serbs buried him with great honours, probably in the nearby Monastery of Tumane. He was proclaimed a national hero of Poland. 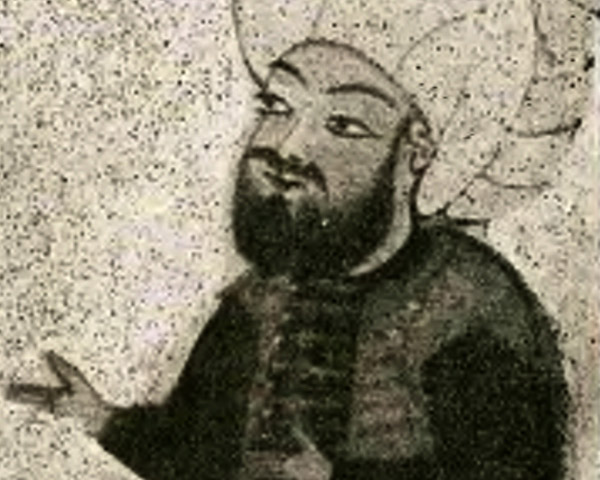 Kodja Mahmud Pasha (around 1420 – 1474) was a capable Turkish politician, a popular vizier, poet and patron of writers. He was born either in Kruševac or in Novo Brdo around 1420. His father descended from the Greek family Angel, while his mother was Serbian.

As a boy, he and his mother were captured by Turkish cavalrymen while running away from Novo Brdo to Smederevo in 1427. He was an extraordinary military commander, but also a beylerbey of Rumelia, i.e. governor of the entire Turkish territory in Europe. When the Sultan sent him to Serbia in 1458, Mahmud Pasha conquered the fortified Monastery of Resava, the towns of Viševac and Žrnov, and finally, on August 10th, the Golubac fortress surrendered to him. 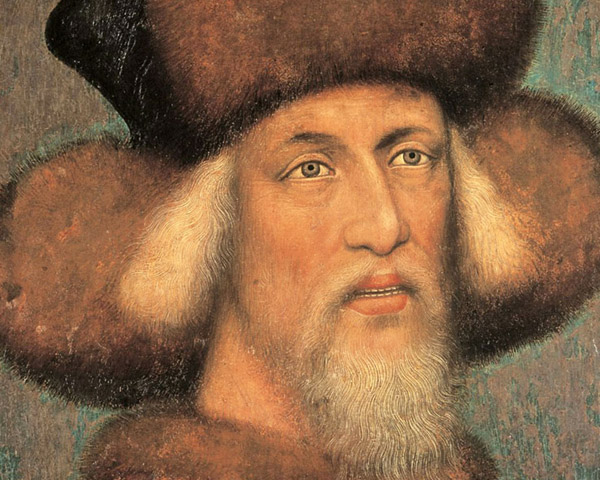 Sigismund of Luxembourg (1368-1437) was the king of Hungary, tsar of the Holy Roman Empire, margrave of Brandenburg, king of Romans and Bohemia. He was deemed powerful and wise ruler, capable, ambitious, charismatic and highly educated person, he spoke several languages. He also founded the Knight Order of the Dragon. He was an admirer of the knight tournaments.

Being aware of the importance of Golubac, Hungarian king Sigismund gathered the best knights of Europe and started one of the biggest battles of that time – the battle to take back the Golubac Fortress. Although the Golubac Fortress had been the battlefield many times, this one echoed all over the world at the time.